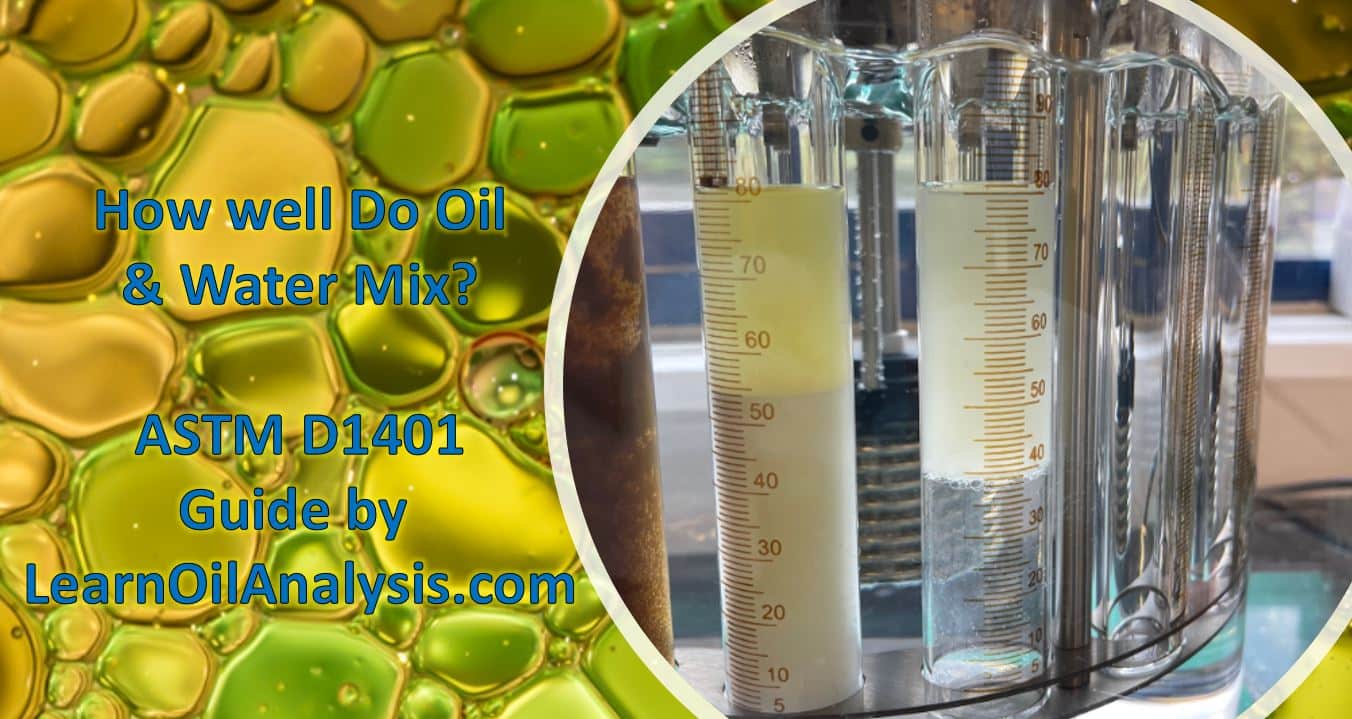 You perhaps learnt this fact not long after the sky is blue. These are long-established terms, but just as the sky can sometimes be red, so can oil mix with water in the right conditions. This is an important exception to the rule to learn when talking about lubricating oils because this may be a desirable or undesirable property depending on what you are trying to achieve.

Water is a poor lubricant and usually denser than lubricating oil. This means under loaded conditions the maximum loaded point; at the bottom of a bearing, for example, will end up with water in contact with it. This is bad as under load heat forms and water boils. This leads to all that is left is air and water vapour, which is a very poor lubricant indeed. Hence in certain oils, additives such as anti wear and / or detergent and dispersant additives are used to solubilise water so that free water is not allowed to collect and cause wear at loaded points. However, this means the problem is dispersed across the entire system, so the lubricant performs poorer, but just not as bad as free water.

This is great for systems that likely regularly have water contamination that needs to be emulsified and prevented from building up at loaded points such as low-level condensation in engines and gearboxes.

Another example of beneficial use of mixing oil and water is in fire-resistant emulsions where mixes anywhere between 30 and 70 per cent of oil to water are used to give fire resistance to a fluid. These oils are deliberately manufactured with additives to prevent the emulsion from splitting similar to how your glass of milk doesn’t split into oil and water.

Oil and water mixing benefits by preventing the collecting of free water at loaded surfaces. This is good for wear protection, but overall weakens the performance of the lubricant vs no water at all. Hence, ideally you want to remove the water if you haven’t managed to prevent it from getting in into the system in the first place. An oil change will solve that. On a small gearbox holding perhaps a few litres of oil or even on your engine of your vehicle holding perhaps 5 to 10L of oil this is not too onerous a process. However, imagine you have a system holding 100,000 L of oil this would be expensive. Hence, you might want to ideally drain off the water and not have to change all your oil for a small amount of water contamination.

If you are in power generation where the process of many power stations at some point involves heating water such as in a steam turbine you carry a high risk of water contamination too. So clearly an oil that readily emulsifies water is not ideal as that could be very costly having to change the oil to remove the water. Hence these types of systems want an oil that readily separates or sheds water.

Another common example is in marine industries where seawater can enter lube oil systems and disposal of oil/water mixes in the middle of the ocean is not practical or legal. Hence, these systems also need good water shedding abilities so that disposal into separate oil and water waste streams is possible.

Hopefully, you now see that establishing how good or bad an oil holds onto or sheds water is an important thing to know. This is where oil analysis comes in as this can monitor the performance of the lubricant in an emulsion form and how it separates. There are quite a few methods for measuring how well oil and water separate. All have their unique advantages and disadvantages, but there is also a lot of overlap.

Why so many different tests measuring the same thing?

To be honest I suspect half the list of test methods were only created by instrument manufacturers to be able to sell multiple versions of tests to labs like mine. That said, there would still be a lot of methods out there covering essentially the same thing.

This is because there are many international organisations that have their own methods. For example in the UK the methods are IP for institute of petroleum. In Germany it’s DIN, in Japan it is JP. Each country body has its own rule book of methods that are updated by committees every few years or so. Many methods are carbon copies of other countries and called equivalents but others have slight variations meaning you might have to add or change instrument options or even buy completely new ones to offer both methods. Hence, when I speak to German clients they may not interested in the British IP methods and want their DIN versions. This can be awkward when you deal internationally. There are however two method systems that people call international.

One is ASTM which is the American system and the other is ISO the European system. Although these are big method bodies, the main reason they tend to dominate is they run proficiency testing schemes – I.e. where your lab can compare themselves against labs all over the world. My lab is part of the ASTM schemes and if I look down the countries list of other labs in my schemes there are labs from Argentina to Zambia and everything in between testing the same sample as me to an ASTM method so we can see who is getting the closest to the true average answer. These schemes tend to standardise how tests are performmed globally and any form of accreditation requires these schemes to be joined, so there is a major incentive to use ASTM or ISO systems. Hence I try whenever possible to quote an ASTM or ISO method if not one of our own developed methods so that anyone reading the report anywhere in the world knows what the test means.

With all that choice, the use of internationally recognised methods helps bring clarity

Although I am patriotic about some of our British developed methods I also am a pragmatist and realise the ASTM methods are more widely used internationally. In fact, speaking to one leading British instrument manufacturer of lab equipment I was told they had stopped manufacturing the British IP19 method and converted entirely to the ASTM D1401 method as the ASTM method had 500x more sales.

The test involves mixing 40 ml of oil with 40ml of water (deionised or artificial seawater depending on the client) at 1500rpm for 5 minutes and timing how long to separate to less than 3ml of emulsion in 5-minute intervals.

The test parameters can be tweaked for the oil type so typically 54’C would be used, but for thicker oils of ISO VG 100 and more this can be increased to 82’C. Further tweaks and alternative methods include hotter temperatures and faster mixing speeds, but these are rarely used for specific research projects.

Step 1 – Pour out 40ml of oil and 40ml of water into a measuring cylinder and heat to the desired temperature. 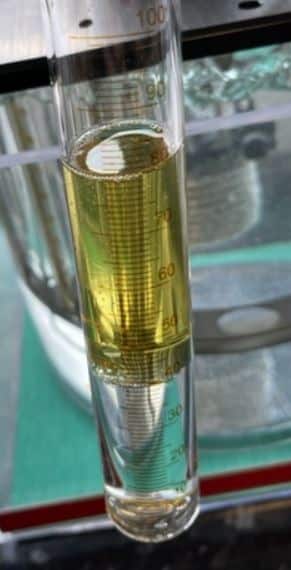 Step 3 – Time the separation and record at 5-minute intervals. 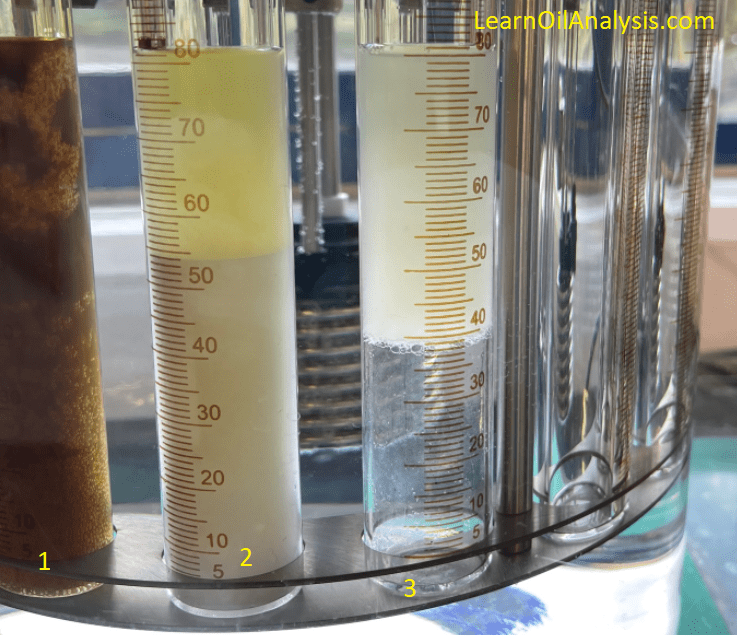 How are ASTM D1401 results reported?

So a result of 40-40-0(10) means the oil completely separates into oil, water and no emulsion in 10 minutes. A result of 10-20-50(30) means at 30 minutes there was 10ml of oil, 20 of water and 50 of emulsion. The beauty of this test is it essentially draws a picture for you of how the mix has separated. You will see with our visualiser tool below you can type in a result potentially from any lab across the world and see what it looks like. Other tests tend to work on total time to separate such as the British and German methods, but there is no reason you have to cut off the test at 30 min at d1401 and I have had clients ask for testing data over days for some research projects. Hence I personally feel this offers what all the alternative tests do plus gives a picture in your mind’s eye of how the oil separates.

Are you still Struggling to visualise? Try our ASTM D1401 visualiser tool

can’t see the measuring cylinder properly on small devices? Pop out in a new window