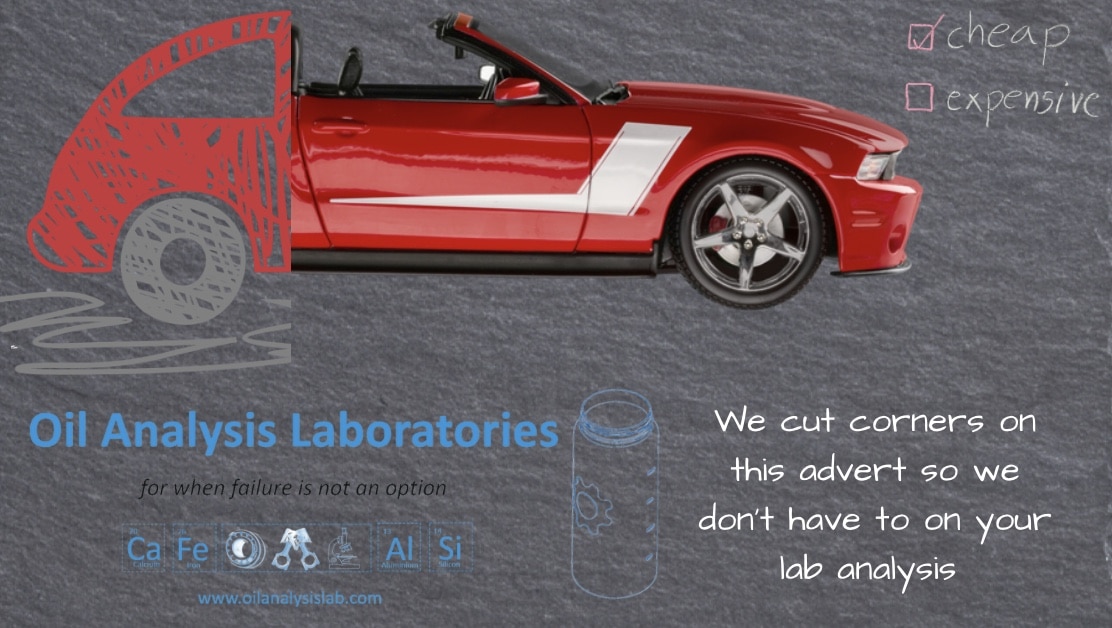 This little image may have made you smile hopefully, but it raises an interesting question about price vs service and how we focus on giving our customers real value but never compromise on the service even if it occasionally means losing a sale. To elaborate I write a lot about customers who either start analysis for the first time or move to us from an existing lab. Some move overnight, some need a trial first but some take a bit longer, but all the case studies are based on people who actually moved.

Today I wanted to do something different and write about a potential customer who decided not to switch after a year of discussions and reflect on this. If any of you are in sales, you know it can be heart wrenching when this happens especially if you invested a lot of time in the client to understand their requirements and are confident you can deliver what they need, but for some reason they don’t move.

To keep things anonymous all I will reveal is the company was a large multi-billion pound equipment manufacturer. The customer had used their current lab provider for years but was less than happy in the last couple of years as the service had dropped. However, the price had stayed very competitive so they didn’t see a motivator to switch even with a drop-in service level.

The problem with the current service and how it was used

I spoke to several of the OEMs service engineers and they all had issues with this current provider with the lateness of sample reports, mistakes and losses of historical trends and over-alarming of problems.

The OEM business since covid had severe staff shortages and didn’t have enough staff to service the machines they were selling. To solve the problems, (as oil analysis reports typically generated a service job if there was a problem), the OEM had asked their current lab to adjust the alarm limits to pass more samples to reduce the workload for the service engineers. This was less than ideal and what was needed was a mechanism to reduce the number of false alarms rather than just moving all the alarm limits up. In we step and we agreed a small trial would take place that could resolve this problem.

In the final stages of discussions, the OEM said we were more expensive by about 4% than the current supplier, which to help this over the line I agreed to match the price. They explained they needed not to just match but a 20% discount beneath their existing service to make it worth the effort of switching. I appreciate the person had a job to do, but the price was the best we could offer. To achieve this 20% cheaper than their current price would have required a complete slashing of our test suite that was superior to what they were already getting and would mean we wouldn’t be able to with a clear conscience give the level of service we should be.

I quipped if he wanted to make a 20% saving he could try to do 20% less sampling but use our lab instead as our LubeWear analysis detects wear earlier and doesn’t need a trend to find a problem. After a little back and forth we agreed to part ways.

Why can less of our analysis actually beat more of another?

Normal oil analysis can’t detect every wear particle in a sample. This means ⅔ of normal wear and >90% of severely abnormal wear is missed. Hence statistically it would take at least 3 samples (and that’s being generous to our competitors) to detect what we would do in one sample potentially many months earlier. So even if we were 3 times more expensive (trust me we are not) we would easily give you a better return on investment.

Please don’t think I tricked you we lost and we really won this client a few months later. I can assure you as of writing we still haven’t won the client. However, people move and 4 months later I got a call from one of the service engineers I was talking to during the negotiation process. He had since left the OEM and was working for one of their competitors. Apparently he was in the room when we had the final teams call and actually liked the quip I made about reducing the sampling and use a better service if he wanted to save money. It had got him thinking and he arranged an introduction to the new OEM.

How an off the cuff remark turned into a whole new sampling programme.

The new OEM (let’s call them OEM 2) interestingly said they were trying to find a way to merge two services as some of the historical oil drain and oil sampling intervals had copied across into new machine service interventions. Interestingly they were using the same lab as the original OEM (let’s call them OEM 1) and had some but not all of the same issues, especially on the turnaround. However, this wasn’t their main issue. Their main problem was their design of service schedules had two very small services that were effectively a couple oil changes and a sample a few hundred hours apart. The question was could they extend one and shorten the other to combine the two. This would mean one day for an engineer saved and greatly reduce workload for their equally over-stretched workforce.

They did a trial backed by our analysis to see if it could be done without compromising the systems over approx 500 machines. Very recently, they have switched their entire sampling programme to ourselves saving themselves tens of thousands on service days and all supported by our LubeWear analysis.

So what about OEM 1?

The original OEM wanted us to compromise on the quality of service to get a cheaper price. We had already agreed to match their existing price for our superior service including LubeWear, but ultimately I believe strongly in the benefits of oil analysis and to get to the price point the customer wanted would have compromised the benefits. Ironically, the total cost of OEM 2 from their reduced service days alone was more than the entire cost of the oil analysis programme, so it may work best to look not just at the absolute sample price but the return on investment too as this type of saving would not have been possible without LubeWear.

The moral of the story

There are in fact 2 morals. 1)  a lost sale is never a wasted one as you never know what seeds may grow from the process even with other clients. The second is 2) don’t get so bogged down on price of the analysis comparisons from one lab to another. I have never once found two labs offering the EXACT same service and we are all different. So establish what value and return on investment you will get and pick the lab that will best help you. In this case, OEM 2 didn’t really care too much about the level of discount on the analysis. They got a good price naturally (as do all our customers), but in addition, there was a much greater benefit and that was the reduced service time which meant they could sell more service contracts and their market share has gone up as a result.

If you are still unsure what to do with your fluid analysis service get in touch using the blue icon below.