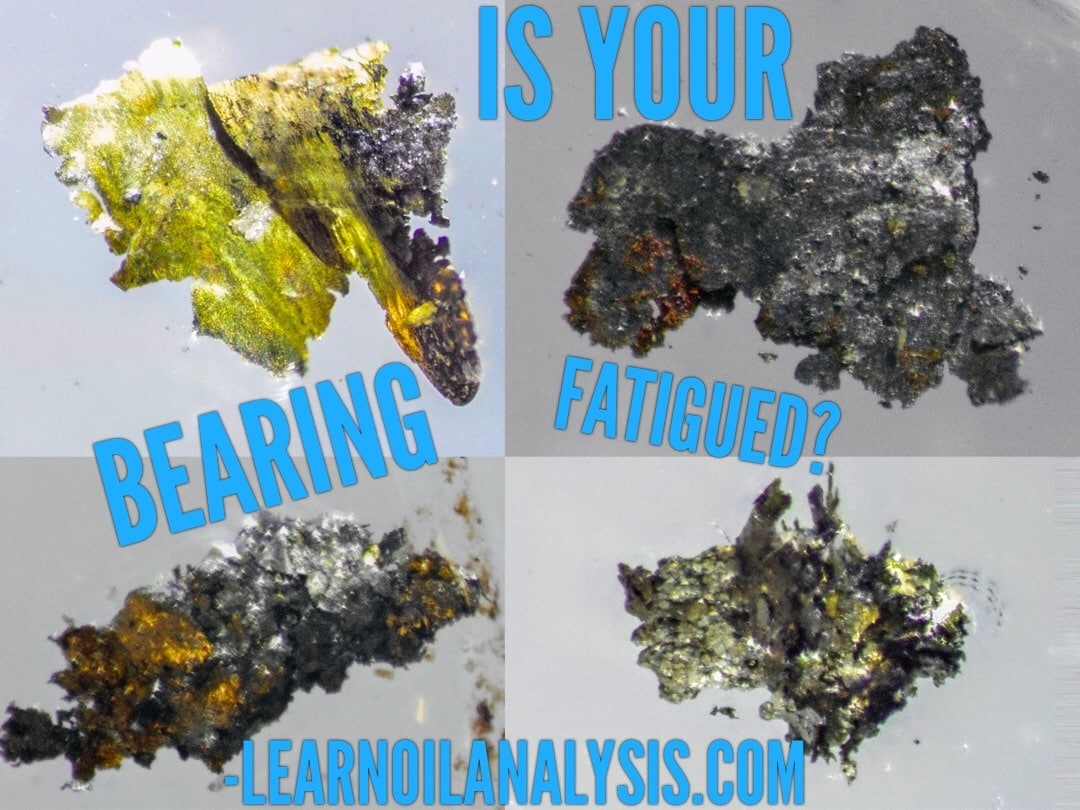 You might find it quite surprising but all 4 of these fatigue wear pictures ranging from 0.5mm (500 micron) to 3mm in size examples came from a single grease sample. The iron value was 2508ppm by standard ASTM D5185 ICP and by the more precise LubeWear acid digestion analysis 82305ppm which is the highest amount of wear I have ever seen in a lubricant sample in my career.

It came from a failed bearing in the rail sector and it shows how important monitoring your bearing health with regular grease analysis actually is. 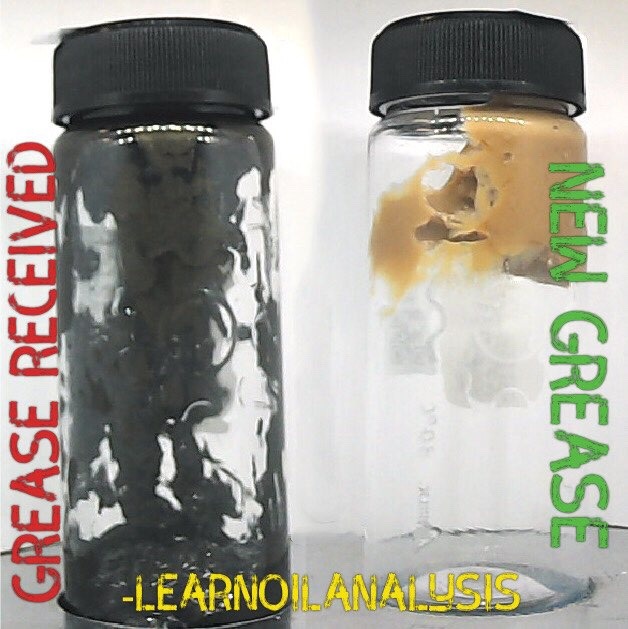 If you look at the sample received vs the new grease you can physically see how much iron is present that it has actually turned the grease black. The black is not caused by the grease being burnt, but by the oxidised wear particles. 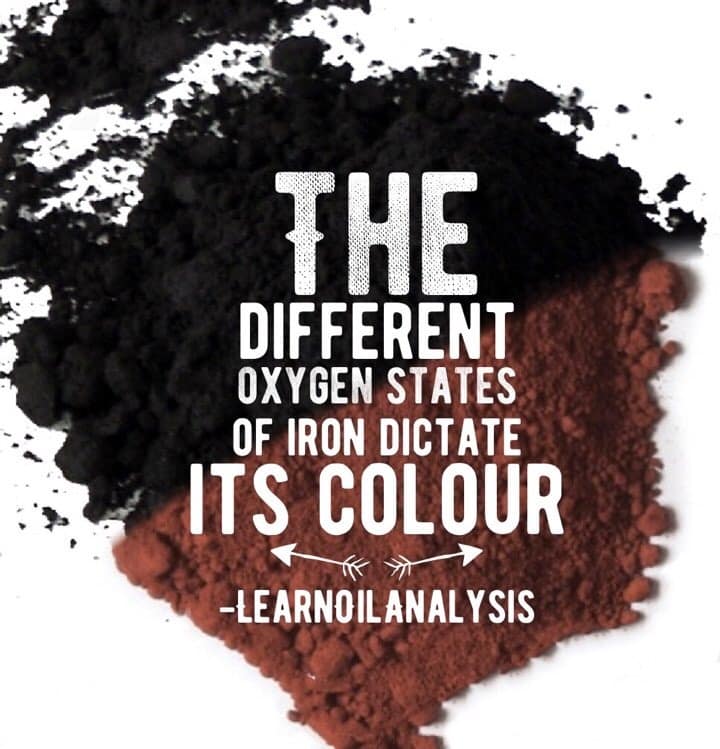 Iron oxide is typically thought of in its reddish brown colour from rust but it can actually found in at least 16 different oxygen states in nature including ones that give various reds, yellows, greens and even blacks.

In this case the wear particles in combination with oil additives of the grease give an overall colloidal (soot like) appearance to the lubricant. Not all of the particles were iron as in a catastrophic failure of a bearing like this you tend to get everything wearing and there was also a lot of copper, which explains some of the yellow colour to the top left fatigue picture.

So what is fatigue wear? 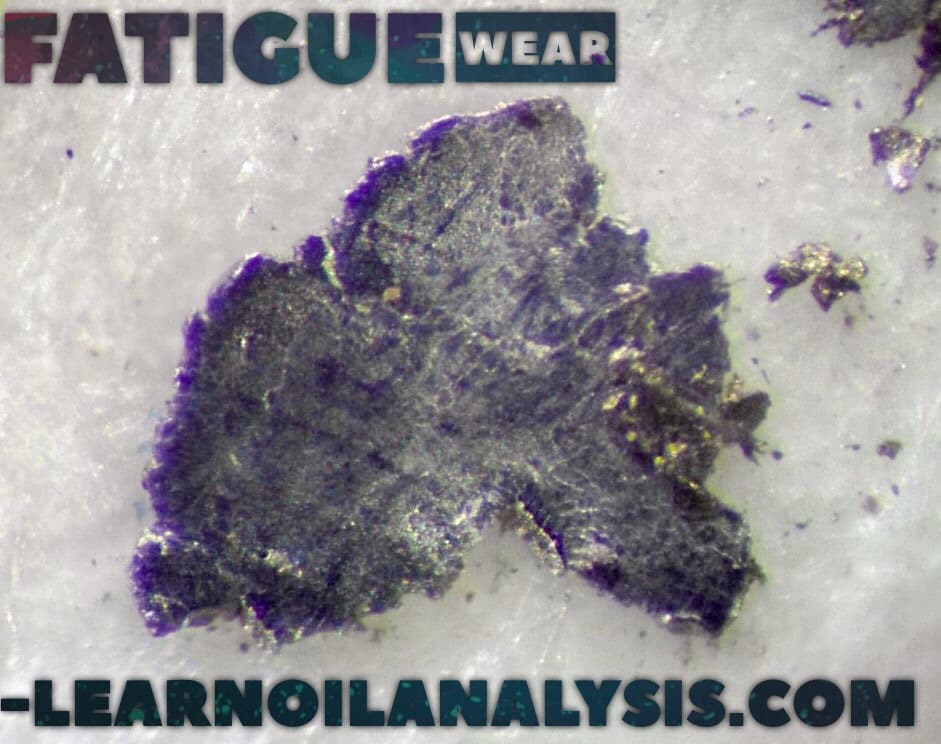 Above is a classic image of fatigue wear. Sample taken from a failed truck rear differential. The standard ASTMD5185 iron was 93ppm but 2580ppm by LubeWear meaning there was a huge skew towards abnormal wear particles. Fatigue wear is often described as looking like orange peel, but I like to think it looks like an overhead view of a small island being roughly circular, but with cracked edges. I also think it looks a lot like my wife’s delicious homemade flatbreads before they go in the pan. I find this diagram below a good aide memoir for remembering what fatigue wear would look like. 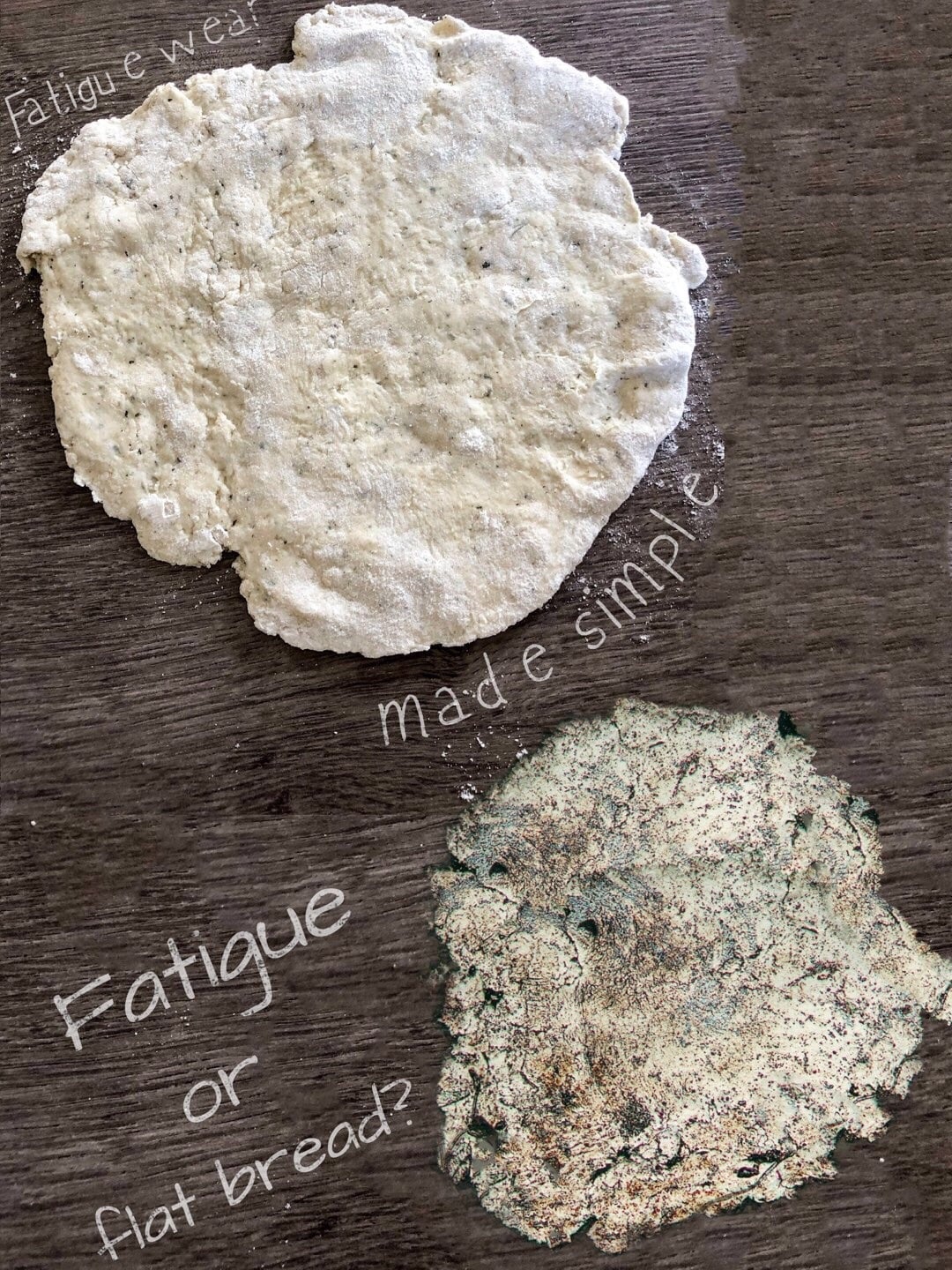 So what causes fatigue wear. Well, although it also happens across gear pitch lines, it is easier explained by thinking of a typical roller ball bearing where the very tiny point of contact of the loaded surface touches the lubricant. See the simple schematic below. We like to think of the lubricant being what the bearing sits on top of, but in fact the bearing itself slightly deforms as the pressure on that tiny film of oil makes the lubricant at that point solid. So in fact the bearing slightly deforms up (see picture below to left), a little like having a slightly flat tire on a road surface.

This repeated deformation work hardens the metal (think of bending a spoon back and forth repeatedly and eventually it snaps). This repeated deformation eventually begins to crack the surface (see zoomed in photo to right below) and chunks break off (see photos above). This is a common failure mechanism in old machinery and is expected at end of life of a machine to see this. However, we are interested in premature failures, so what causes early fatigue wear? 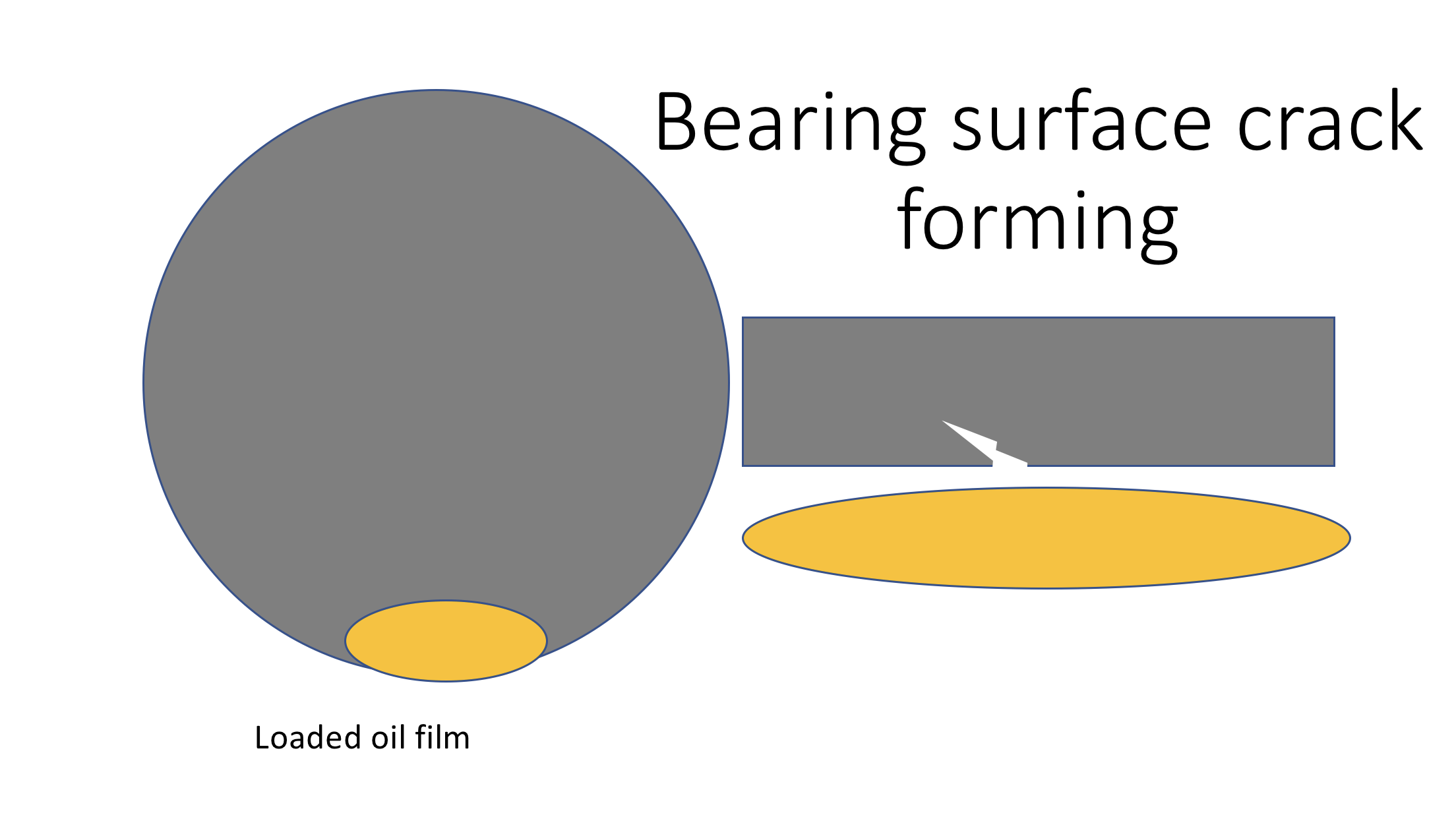 Fatigue wear can be accelerated by overloading the bearing so the level of deformation is increased. Equally dirt ingress means dirt can collect in the little fatigue crack. The repeated hammering of the solid lubricant film (formed by pressures up to 500,000psi on the bearing point of contact) on the dirt acts as a hammer and chisel and gouges out fatigue chunks from the system.

So high fatigue wear points to overloading and or dirty lubricant. The overloading may be caused by overheating the lubricant so it is too thin, use of too thin a lubricant or simply adding too much load beyond what the system is designed to handle.

Fatigue wear is an important failure mechanism of gears and bearings and is likely how equipment will eventually fail from old age even if well maintained, but premature fatigue wear is a common mechanism of total system failures. Using regular oil analysis can help you detect both the causes and the presence of wear particles to catch these problems early and extend component life. With the unique LubeWear technology designed by Oil Analysis Laboratories fatigue wear can be detected earlier than it ever has been before and much earlier than traditional oil analysis services have been able to offer. If you would like to find out more about wear in your machinery press the contact us button on the bottom right of this page to get in touch.