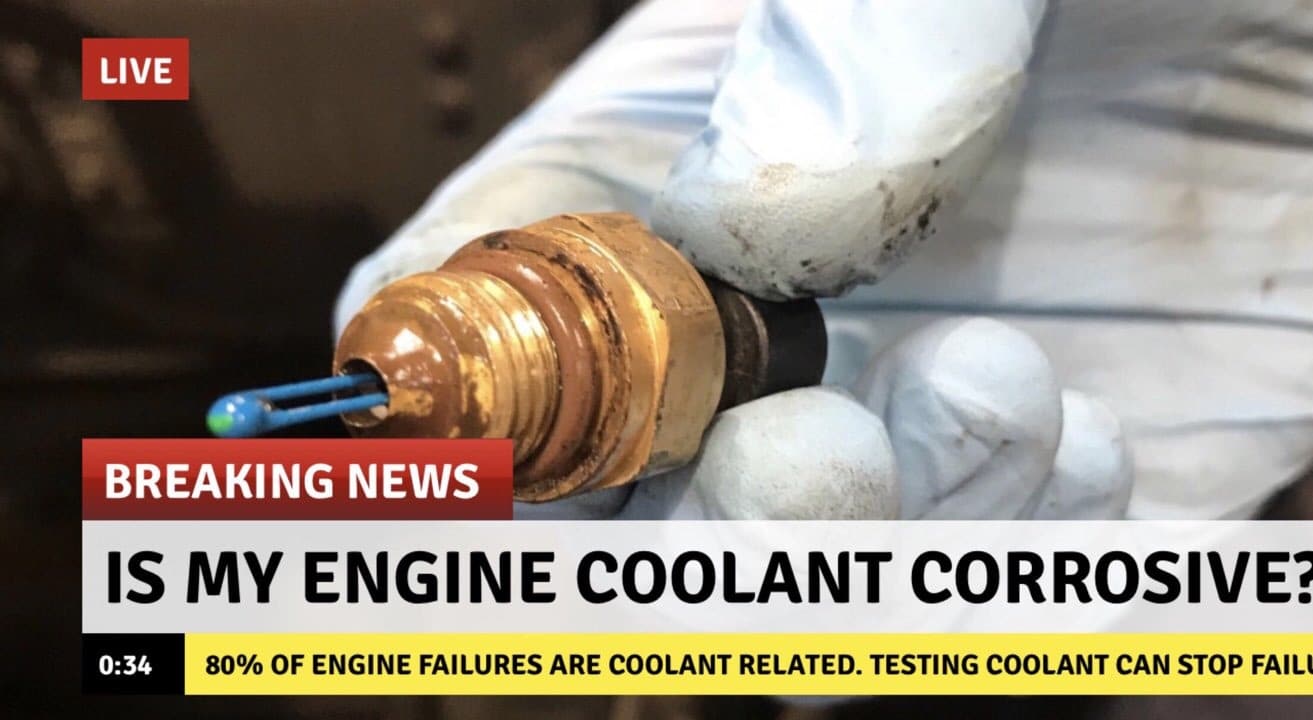 This is an interesting case study for a sample we received recently from a vehicle dealer. The reason for the sample was the temperature sensor of the cooling system had become corroded and the customer wanted to know why.

The engine coolant was known to be a generic brand rather than the OEM recommended brand. The vehicle dealer suspected the wrong brand of coolant was the cause.

The analysis showed the coolant was ever so slightly under concentrated at 47% glycol by refractometer rather than the recommended 50%. However this would normally be considered acceptable error in the mix. Equally at this concentration the fluid should have plenty of corrosion protection.

Elemental analysis showed nothing other than the corrosion particles from the temperature sensor and no evidence of known to be corrosive tap water.

So what was the cause of the corrosion? The end customer said they only ever used pre-mixed coolant and never topped up with tap water and the analysis supported this with no hard water soaps detected. Was the product just a poor quality coolant? If it was, the coolant manufacturer might have some awkward questions on their hands.

“Was the non-OEM coolant corrosive?”

Fortunately the last part of the analysis found the coolant manufacturer was in fact blameless and the coolant was contaminated. The contamination was found to be Adblue at 12.5%, otherwise known as diesel exhaust fluid which is very corrosive to metallic cooling system components. This is a product which is 32.5% urea in very pure deionised water. So no hard water soaps or chlorides would be found under standard coolant analysis.

Equally, the refractive index of 32.5% urea is fairly similar to 50% ethylene glycol so measurement by refractometer at either the lab or at the vehicle dealer with the hand held equivalent refractometers would not detect contamination with Adblue. This explains why the glycol concentration was still close to 50% despite having a large proportion of Adblue. In fact the sample could be quite grossly contaminated and it would never be detected by ordinary fluid analysis. Even the premium level analysis suites offered by most laboratories for coolants does not test for the presence of Adblue. So why is it not offered? The answer is firstly many labs don’t have the technology to detect Adblue in coolant, whilst others that can perform the testing it is often considered too laborious or time consuming to do routinely.

However, with Oil Analysis Laboratories we have a different mentality as we see your sample as a problem to help you solve. That is why checking for the presence of Adblue in your vehicle fluids such as coolant and diesel is a standard test for us. We believe in going the extra mile for our clients to help determine the cause of vehicle problems. Rather than be limited by a set batch of tests, we do the tests necessary to get the job done and get you the information you need quickly and efficiently.

Following on from this sample 3 more vehicles were identified with the exact same problem. We requested samples from all fluid containers the vehicles had recently filled from and helped track the contamination to a single coolant container. In the end it was discovered the end vehicle operator had two half opened containers in the vehicle workshop of what he believed to be coolant and trying to tidy up poured one into the other so all the future fills of coolant in the vehicles ended up being a mix of coolant and Adblue.

If you would like to find out more about our analysis suites and how we can help keep your vehicles in tip top condition and avoid unnecessary costs then contact us by the blue button on the bottom right of this screen.