I often get asked by customers how to read an oil analysis report. Most are a little scared when they first see all the metals and their values and don’t know where to start. However, I will let you into a small secret. It is actually pretty easy when you are given a few small pointers to get you started. This engine oil interpretation article is the first in a series of how to read oil analysis reports guide to help end users of oil analysis get to grips with the basics of reading an analysis report.

Engine oils are usually the most straight forward to diagnose samples as the different components are made up of different metals. This makes identifying exactly what is wearing much easier. Knowing the type of engine is the most important start though as this associates the most common issues they can have and to watch out for.

This can be split several ways, but one way I try to think of is as follows:

Viscosity is the most important property of an oil. In engines it can go down because of fuel dilution and degradation of the viscosity index improver additives, or up because of contamination with e.g. coolant (think how cream is thicker than oil and water), because of oxidation forming sludges or from too high a soot content. It should not be forgotten human error sources such as topping up with the wrong oil too can cause a change. In each case the source tends to point to other parameters and problems – usually contamination.

You can find out more about viscosity of your oil in this YouTube video below I made on the subject. 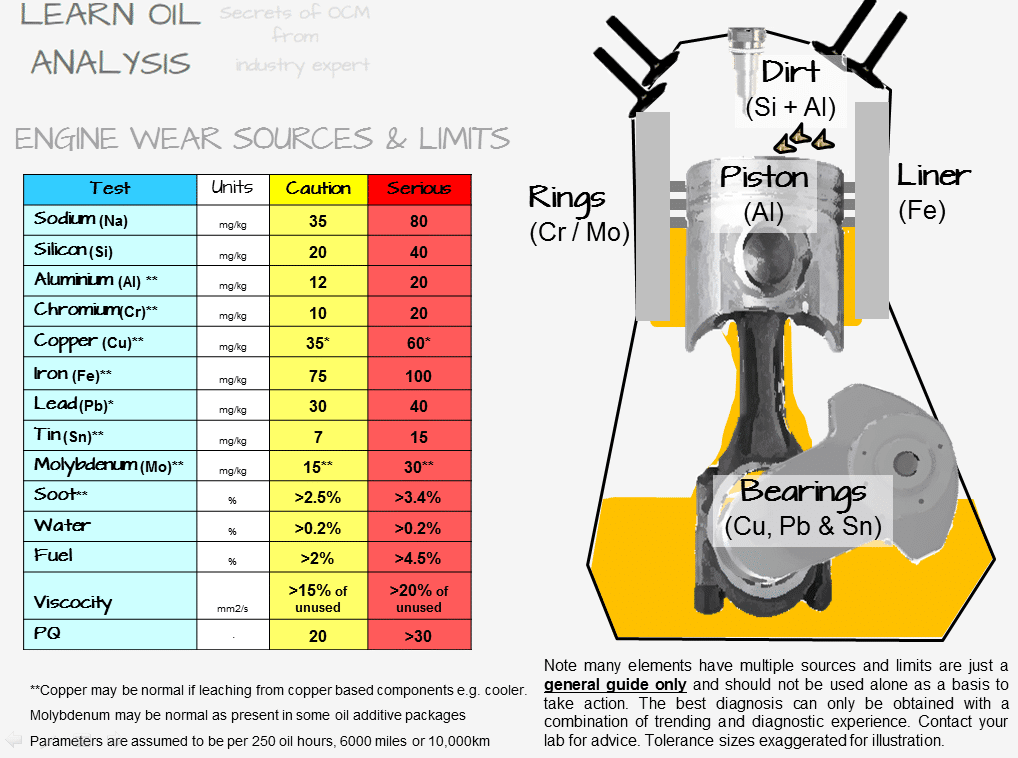 Where would oil analysis be without points to start marking samples as normal, caution, serious or even critical? Although a couple of generic limits are available above, there is also a free online interactive guide to different wear limits for different engine types that can be found on the OAL site. This is worth checking out as it helps you find more bespoke limits for your samples. In all cases unless samples are tested to legal specifications that are just pass / fail then most alarm limits are only a guide and can be over-rules by an experienced diagnostician.

When to overrule alarm limits?

We have already mentioned alarm limits are just a guide. So when do you use them and when do you ignore them? Well it comes down to experience mostly, but I personally look for combinations and causes. So for example if there is contamination without wear then it is less significant than if with wear. It is also important to look at factors such as physical properties like viscosity or additives – if these look wrong then this would make wear more significant.

Most important of all though when determining wear significance is to look at the ratio of large to small particles, which if you use Oil Analysis Laboratories in the UK you get this with their LubeWear analysis. Ordinary wear metal analysis only detects 1/3 of the normal and none of the abnormal wear because of limitations of the laboratories equipment. However, the LubeWear technique measures both the small and large particles so by comparing the two you can see if wear is abnormal or not. This is crucial in determining if wear is significant. For example today I had two gas engines from a customer, one with 45 iron and the other with 50 by the standard technique for wear metal analysis. These would be considered approximately the same condition. However when comparing by LubeWear the two values were 52 and 85 respectively. The condemning limit for the two systems for this customer was actually 30ppm, so both were higher than the threshold by both techniques. However one had mostly small wear particles 45 vs 52 by the two techniques where as the other had 50 and 85 – the difference being abnormal wear. Hence although both above the alarm limit, only one was significant and had a big difference between small and large particles (UPDATE: the reason for the large wear particles in the second gas engine was the oil pump was about to fail, which was discovered after the customer received the report and inspected the system).

So now you have the basics why not follow along a worked example with the video below?

Want more help then click the blue contact us button on the bottom right of the screen to get in touch.