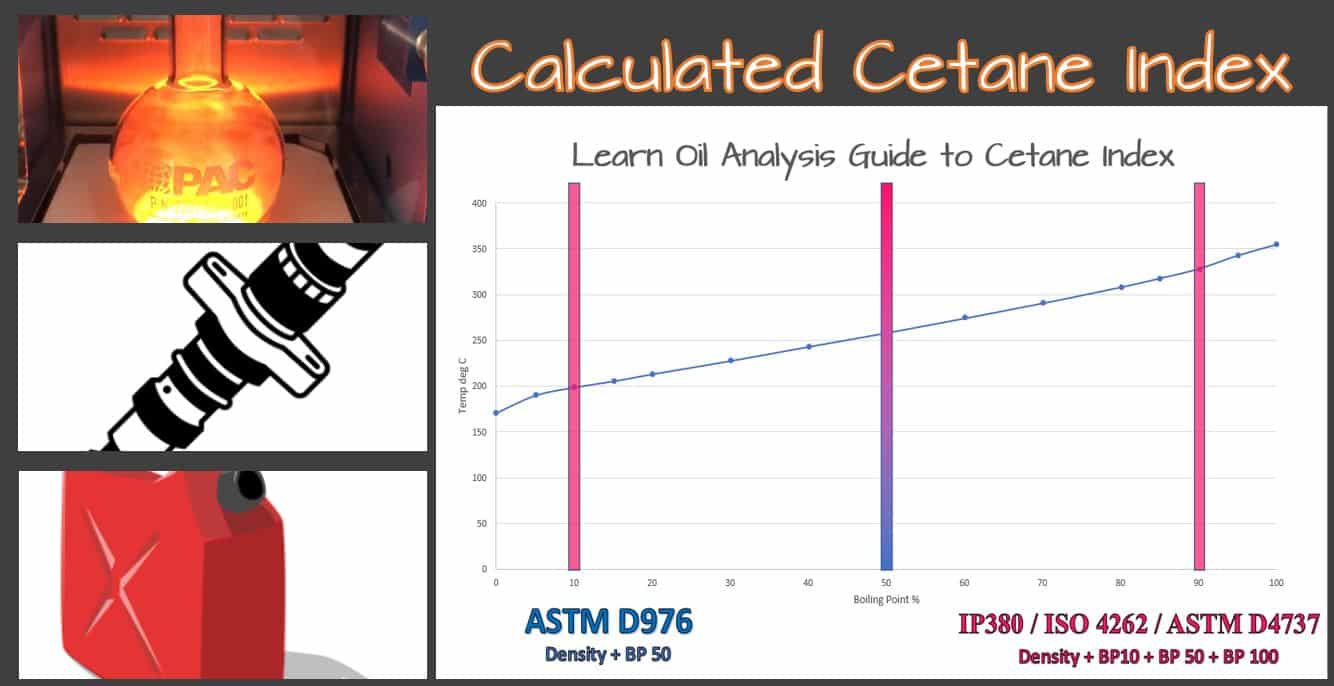 What is a cetane index?

Cetane Index is a number used to denote the quality of diesel fuel. Its petrol/gasoline equivalent is an octane rating. Although they are considered equivalents, they are measuring different things. An octane rating measures how long petrol resists auto ignition, whereas in contrast, a diesel, you want it to ignite earlier in a compression setting, so you are measuring how quickly it ignites rather than resistance to ignition.

You may have also come across the term cetane number, which is a measurement in a testbed, whereas the cetane index, which technically should be called a calculated cetane index (CCI), uses distillation properties of the diesel to infer performance in the engine.

From a lab perspective, although some research labs do have test beds for direct measurement, most laboratories will use a CCI measurement. In reality, the results are usually near identical, and most fuel specifications have the option to use either method. The only real reason to use the testbed method is to assess the performance of aftermarket cetane improver fuel additives which rarely affect the cetane index.

So what does a high cetane index mean?

Generally, it means the fuel should combust more quickly in the engine, giving a cleaner burn and hence a more quiet and smooth running engine. Because of the cleaner more complete burn, you should get less unburnt fuel in the oil and out the exhaust and better fuel economy. I use the term “generally” as much bigger factors far outweigh this in the grand scheme of things. For instance, a poorly maintained and sampled system will likely run poorly regardless of the fuel quality, so these things should never be taken in isolation.

How do I improve my cetane Index?

Normally, this is a refinery process usually by hydro-treatment of the fuel, but this comes at the cost of fuel and limitations in other properties of the fuel.

I would normally cover additives here too, but they rarely affect the cetane index dramatically. However, on cetane number, additives such as di-tert-butyl peroxide and alkyl nitrates quickly decompose to form free radicals in the compression stroke, which can catalyse their chain reaction of the compression ignition and give artificially higher cetane numbers.

So should I be using fuel additives?

Using aftermarket fuel and oil additives is often a personal choice. I was asked this question by a motoring journalist when he was doing an oil and fuel analysis article and a photo shoot at the lab, as this was a common question from readers of the magazine.

The problem is much of the market is filled with products that don’t really do much, often referred to as “snake” oils. Overall, the best fuel and oil additives are owned by or licensed by the fuel blenders. After all, if the product is good enough, the people who manufacture the fuel will come knocking.

I don’t know any oil or fuel supplier who approves of aftermarket additives. After all, if they believed a certain additive was needed, they would have added it.

From the additive suppliers’ point of view, the fuel suppliers are after the best profit and returns on fuel sales, so some additives may not favour this model.

It’s naturally up to you who you believe. I have seen both ends in that we tested some additives that perform quite well whilst others were actually detrimental to the engine. Unfortunately, every aftermarket additive supplier will tell you their product is the best and different from every product. Although, from my experience, a lot of products are essentially the same thing with different brand names. Hence I would suggest doing some fluid analysis testing of your machinery when using any aftermarket additive to assess what is occurring as a result of using it.

2 or 4, How is the cetane index measured?

There are two methods depending on the fuel specification you are using, that measure 2 -parameters of 4 parameters. The two-system (ASTM D976) method uses Density and mid-boiling points, whilst the 4 systems (IP380 / ISO 4262 / ASTM D4737) use the 10% and 90% boiling points as well. The 4 system is more popular these days, but it is useful to be aware of both.

Density is the property of the fuel based on the mass and volume it takes up. Density can be measured in a few ways, including by weight and volume or by using specific densitometers. Density is not a fixed property and will change with temperature, so the temperature of 15’C is usually used for fuel specifications.

This involves boiling the fuel and measuring the different fractions as they come off. Many may think it’s strange having a range of boiling points for fuel as you think of water being 100’C. However, this is because fuel is not a pure chemical, but a range and the mix within that range determines how well the fuel will combust and hence its cetane index. 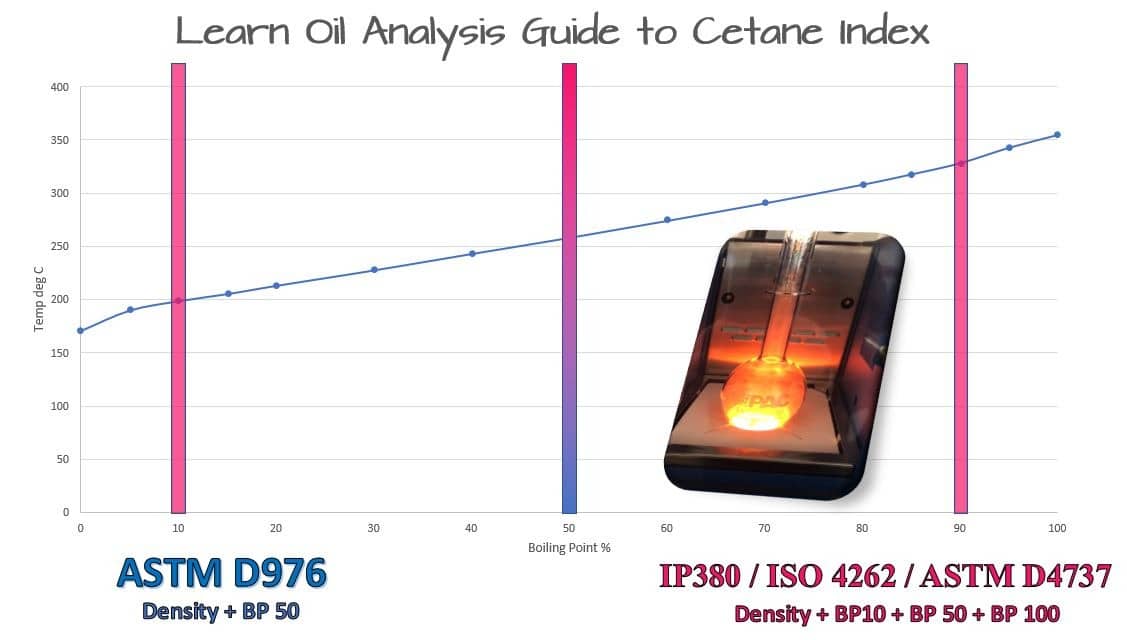 Can’t see the calculator properly? Why not pop view in a new window.

If you want to learn more about fuel properties, testing and performance, why not sample your fuel with us. You can get in touch or ask any questions regarding oil and fuel analysis using the contact us button on the bottom right below.