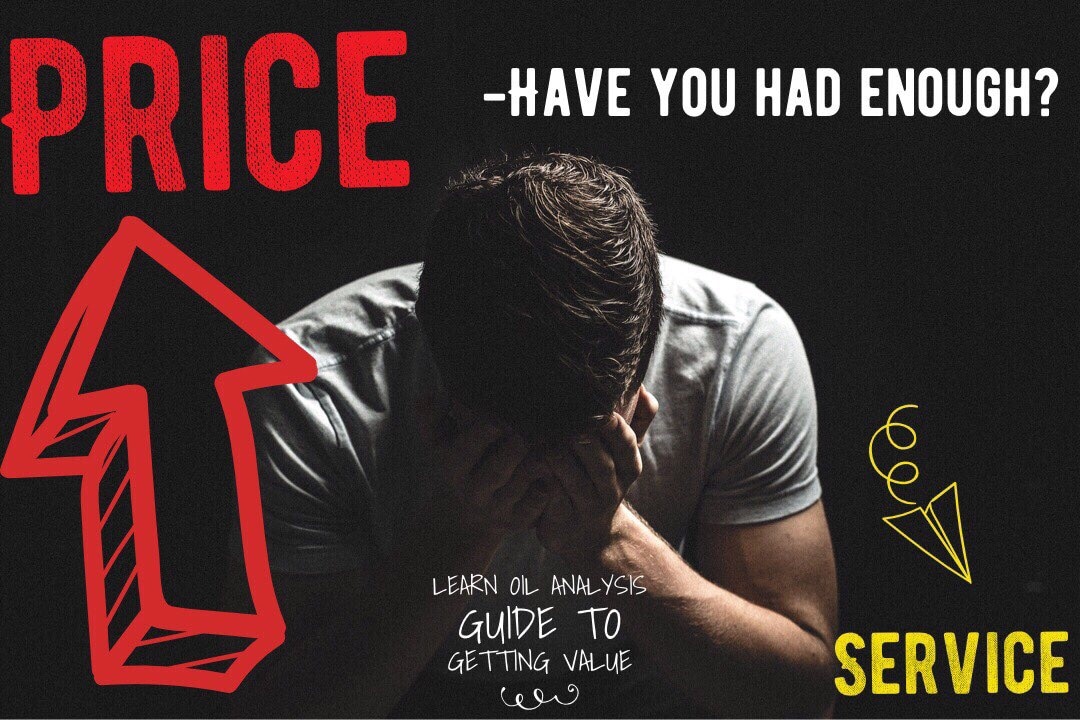 Have you just had a price rise letter wishing you Merry Christmas and Happy New Year, but at the same time telling you your price is going up? Didn’t they do the exact same thing last year too? When you asked them why they are doing this didn’t they give the same old excuses of exchange rates, supply and demand as well as their ever increasing costs. Did the fact these things also effect your business too seem to have been missed?

This is all too common a place with generic price rise letters coming though your door and filling your inbox that the price you now pay seems more like an excel formula an accountant came up with rather than what is a fair price for the service.

What is even more frustrating is when your service level seems to have gone down and has become less personal. You no longer have a single point of contact and you feel more like a number than ever.

This article will describe how some labs are now operating, but also gives you an alternative approach so you end up with better value for money each and every year.

A tale of awful lab service.

I was recently speaking to a new customer who was in this exact same predicament a few months earlier. They were using the same condition monitoring lab for over a decade and over the last few years the price had gone up by nearly 40%. They used approximately 400 samples a year and their use of the service had increased by 25% over the last 2 years in terms of the amount of samples they were sending, yet prices had still gone up dramatically.

“Prices had risen by 40%, but turnaround times had more than doubled”

To add further insult, the turnaround time had changed from typically 2 or 3 working days to what was now at best 5 working days and often up to 7 working days. When they complained they were told the lab were very busy, important instruments had broken or staff were off sick. These are likely true reasons for the delays and as a force majure (unforseen circumstances) one off, the client said they would have been understanding. This was not the case and the problems with turnaround seemed to keep reappearing every few months and not once were they ever kept updated as to what was happening to their samples.

Even on a force majure a lab should have a plan to handle these events. I recall about 15 years ago my part of my father’s had a small fire on a Thursday that was compounded by the fire brigade soaking an important instrument – an ICP. However, by the Tuesday afternoon the lab had caught up again as they had everyone in over the weekend working 3 shifts cleaning up and processing the samples on the one remaining ICP. Yes the samples were late by a couple days, but they did not receive a single complaint as the customers knew the lab had pulled out all the stops for them.

For the last couple of years they felt trapped as they saw nowhere else to go. To try offset the price rises they had actually signed a 2 year fixed price contract and committed to buy 800 samples. This meant they were trapped for 2 years in having to use up the samples with what was a poor service before being able to move to another supplier.

A happy ending to the story?

When I finally by chance spoke to this client at a trade event and I explained I was in the oil analysis field, he explained his tale of woe. He was reluctant at first to try something new as he still had bottles to use up. So I asked him how many bottles he had left – he had 18. I told him he could have 18 free analyses on us and we would exchange the kits from his current lab for our ones. That way the customer had lost nothing, his current lab had 18 samples they didn’t have to process, but had still been paid for and I absorbed the cost of it all. I gave him my business card and 2 days later I got a call. He explained he didn’t need all 18, but had 7 samples in his current lab’s bottles he needed doing urgently, he was driving them over and could he drop off the samples off at 6pm. I agreed. When he arrived he explained they had had a catastrophic pump failure and they wanted to see if any of the other systems connected to the pump had been affected.

My team pulled out all the stops, stopping late preparing the samples so they could go out first thing in the morning. At 10.30am the following morning the customer had a call to tell him that all the samples were fine and he could restart the equipment.

That afternoon I had a purchase order for 250 samples. The customer explained they had already sent some of those 18 samples to their old lab the day we met at the trade event. This was now the 3rd day they had the samples and when he called them this afternoon (after we had already informed the client of the results within hours of arrival) he was informed the samples were still not ready and awaiting a re-test. This had been the final straw and the customer decided to switch.

Some may argue this was just good luck to get a customer who happens to have a bad service at the time and able to switch. I would agree as is all sales you need to knock at the right time, but it’s strange how the better the service you provide the luckier you become.

If you take pride in your service, you would just want to deliver better results anyway – regardless of price

I have highlighted an example of how just accepting a service that is declining is a huge mistake, especially when the price is going up and there are likely better options if you just look.

When the service is bad and the price is rising, it may seem like a no-brainer to look elsewhere, but what if the service is not that bad and stays much the same? Should you accept price rise after price rise?

“A former director told me I wasn’t losing enough customers.”

To help answer this I would like to recount another short anecdote. The director of a business I used to work for once told me that I wasn’t losing enough customers. Slightly taken aback and thinking I misheard him, he clarified and said that I wasn’t increasing prices high enough that customers were starting to leave us. He explained that the customer base was too “comfortable”.

This for me epitomised everything that is diametrically opposite to good customer relationships. The business my father built and the new lab I started in recent years have at the core service excellence where we develop great relationships with both our customers and suppliers. I never take a single customer for granted and even though we get very positive feedback from our customers we are always striving to do better. We continually reinvest in the business to ensure each year the service our customers receive is better than the last. Our customers this year have received improvements in terms of additional tests, faster turnarounds, lower carbon footprint products and new services and all without a generic price rise.

This is where people may disagree with me, but I simply don’t believe in blanket price rises, especially ones dramatically above inflation. Of course prices do from time to time have to increase otherwise there would never be an incentive to buy now vs in the future and the economy would enter a recession. However, they shouldn’t be cart-blanche accepted as a mandatory part of the service.

You as the customer should always feel you are getting better value for money than you did in the past, otherwise you feel cheated.

This is the mentality I took with my lab. This year we have added a range of improvements including:

All this without a single customer getting a price rise letter.

Does this mean if service drops occasionally you should leave your supplier?

Do I say I will never have a late sample ever? Of course not and it would be stupid for anyone to promise this in any service, but this should be the exception rather than the rule. The lab should have built up such a good service level for a client that a once in a blue moon delay is not a problem.

So how should I get value when choosing a lab?

If a lab tries to get you to sign a contract tieing you in to using their service this should be seen as an alarm bell. For condition monitoring at least in the north America and European markets most people buy pre-paid sample kits and send them in whenever they want and are not tied into buying again. We never tie our clients into contracts to use us and hence we have to rely on excellent service to retain them. Knowing our customers could all leave tomorrow if they wanted to drives us to deliver better services continually so nobody ever wants to.

“None of our clients are tied into contracts to use us and can leave us tomorrow if they wanted. It’s the only the great level of service that keeps them coming back. “

Ask yourself – does your lab seem to care about what they do? This could be your account manager if you have one or your general impression of the people in the business. If you feel like just a number and don’t think you could rely on them to deliver when it matters most then you have to ask yourself what is the point of using them. For me, I would like to say myself and my team take tremendous pride in what we do and in delivering the best to our clients. We have had commented by customers, “it feels like you are always trying to surpass our expectations.”

Finally, if you have had a price rise letter – ask yourself do you feel like they deserve the extra money. If there has been a dramatic improvement in service, turnarounds and detail of testing then perhaps the rise is merited, but if the service isn’t improving then this means each year you are getting a worse and worse deal.

If you have recently had reason to reassess if your current lab the right lab for you then please contact us by clicking the blue icon below and see how we can help you get value for money again.